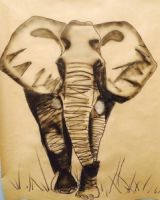 George Garrett III has always been interested in creating art. He said his first foray into drawing came at the age of four years old.

“I was scribbling on a piece of paper in the living room and I noticed the picture I drew looked like Fred Flintsone,” remembers Garrett.

He said his dad looked at the picture and agreed it did look like Fred Flintstone. After that, Garrett drew another picture and then another and he’s been drawing ever since.

When he was younger, Garrett said people tried to convince him to become an architect. It was a path he thought he might be interested in until he found out (a bit later on) that architecture was more about math and measuring than drawing.

That’s when he decided he wanted to be an artist or an art teacher.

Garrett’s basis is drawing but he also paints. He likes doing a mix of both and enjoys trying new media.

“Within the past three or four months I have been experimenting with paper, drawing with marker and mixing that with airbrushing. But I also like watercolor, sketching, acrylic paint and graphic art design,” said Garrett.

He loves to draw people’s expressions and enjoys urban settings. Garrett said he’s been in social services for over 20 years and has worked with lots of people. Right now, he’s especially interested in drawing and painting people that have a lot going on inside; a lot of intensity.

“My goal right now is to do more paintings and drawings of people that are more abstract than traditional. I like to mix the abstract with real-life people,” he said.

A couple of weeks ago Garrett said he experienced a little bit of a block in terms of creating. When he gets “artist’s block,” Garrett explained he actually experiences a buildup of ideas. And once it ends, all of a sudden he has several pictures in his mind and like a madman starts creating several pieces at once.

Garrett said he really enjoys the Renaissance Era in art because that’s when artists began going back to painting the human body.

He’s hoping to have 10 pieces on display at Cali Commons during his solo show. Garrett said they will be grouped thematically and be larger pieces, ranging in size from 18’ x 20’ to 30’ x 30’.

“This is my first solo show. And this month is my birthday so what a great way to celebrate the next step in my life,” said Garrett.

For those who want to take their art to the next level, Garrett recommends carrying a book for sketching ideas or writing ideas down to refer back to in the future. He said it’s important to capture your ideas so that you don’t lose the energy you had when you go back to work on it.

And Garrett works on his art every chance he gets. He tries to maximize his time and his tools. If he’s low on something, he will grab another medium. Garrett explained that’s how he started working on paper. Because canvas is expensive, he started messing around with brown wrapping paper and said it’s working pretty well.

“Surround yourself around whatever it is you are trying to become. You need to feed off other’s people’s energy. There’s something about that that’s empowering and makes you stronger,” Garrett said.

George Garrett III’s show will be on display October 13th-24th. The artist reception will be Friday, October 17th from 7-10 pm. The show can also be viewed during open gallery hours on Wednesday, October 15th and Wednesday, October 22nd from 5-8 pm, and by appointment by contacting info@calicommons.com.