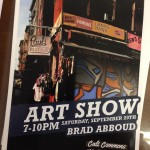 Roughly 2 years ago artist Brad Abboud was listening to music while he was painting. This wasn’t out of the ordinary by any means, but for some reason the creative muse struck and he determined that he must do a series of paintings based on an album.

Lucky for all of us, he chose the Beastie Boys classic “Paul’s Boutique”. He felt this album was the perfect fit – there’s lots of room for interpretation, it’s lighthearted, and a definite cult classic.

To Brad music is just part of the painting process. Jazz gets him in the zone, but hip hop is his second cup of coffee. Being a former DJ, he knows his music. He said Paul’s Boutique helps him focus, because he knows the album so well. He finds himself painting with the beat or to what he knows is coming next. He’s riffing with the music, which interestingly enough parallels the way the Beastie Boys made the album in the first place.

Brad didn’t set out to be an artist, but a chance encounter with a movie introduced him to the idea that art doesn’t have to be serious or stodgy. He was 20 years old and living with his parents, so he grabbed some leftover house paint from the garage and set to work. He’s kept with the house paint ever since. He likes that it dries quickly, allowing for him to cut better lines.

Being a believer in accessible art, he finishes his pieces with envirotex resin so people can touch it. Seeing his colorful, tactile pieces, it’s obvious that he wants his art to connect with people in a fun and attachable way.

This, of course, brings his story back to the album. Each piece of his art is named for a song on “Paul’s Boutique”, and they do an amazing job of capturing the nuance, intricacies, layering, and just downright fun vibe. Much like the Beastie Boys themselves, Brad shows that you don’t have to take yourself seriously to be seriously great.

He says he doesn’t know how people might interpret his stuff, he’s trying to take away the self-importance.