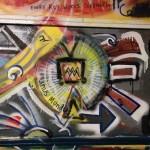 Fourteen years ago, Brian Gennardo – who bears an uncanny resemblance to a young Tom Waits – had car trouble and got stuck in Omaha on his way to Vancouver. When people asked, he told them he was just passing through. This went on for about a year. He took a job at the Med Center working with developmentally disabled kids. His goal was to work until his first paycheck, and then continue his journey to Vancouver.

It turned out that it took six weeks to get your first paycheck at that job, so he stayed a little longer. Meeting with a professor over coffee, he asked Brian, “Where are you going?” Brian replied, “Vancouver”. He asked the same question again, and received the same reply. It wasn’t until the third time he asked the question that Brian realized what he was really asking. He didn’t have an answer.

He decided to stay in Omaha.

Around the time he first was “passing through” Omaha, he started painting a lot of doors and windows. The representation in relation to the title doesn’t need spelled out here. As Brian put it, “We’re all really just passing through, aren’t we?”

For ten years Brian worked with developmentally disabled and at-risk youth. At one time he was the caretaker of nine teenagers in a group home. Perhaps he was so able to connect because he felt like a vagrant soul himself. His art reflects this internal struggle of finding our place – utilizing materials such as oil, acrylics, latex, spraypaint, and even eyeliner.

He says each piece begins with a door or window. This is his familiar place, his identifiable jumping-off point. From here the art creates itself. He says that the doors and windows are painted by him, and he doesn’t know where the rest comes from. It’s as if the paintings paint themselves.

Brian’s conflict with his art is that he knows it’s not going to change the world. He says “nobody’s going to look at my work and decide to get their GED, or get off drugs, or become a better parent. I just want them to enjoy the paintings. That’s really all I can hope for.”

Before we left I asked him where he was going. He said he was just passing through.

You can see Brian Gennardo’s show, “Passing Through” at Cali Commons from July 4th through July 18th. The opening reception is July 4th from 4 – 8pm.