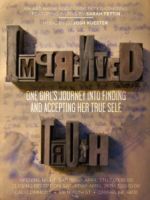 When you hear about a female artist presenting a show based on her journey into personal acceptance, your first thought probably runs toward that of angst-y, heartbreak-riddled puzzles the likes of which Fiona Apple would be proud. That is until you meet the disarmingly bright and charming Sarah Fettin. Turning the concept of self-exploration on its ear, her show “Imprinted Truth: One Girl’s Journey Into Finding and Accepting Her True Self” promises to be a welcoming event, encompassing the emotions common to everyone, and bringing forth self-truth in a candid and relatable way.

Sarah’s story as an artist began in childhood. Coming from a creative family, projects involving holiday decorations, sewing, and paper mache could be found around her home. With the support of her family, Sarah realized midway through college that perhaps art was something she should pursue as a career, and admits that it’s been a struggle to grow into calling herself an artist without feeling like there was an air of pretention about it. All she knew for sure was that as much as she dreamed of being a veterinarian, math and science were not her thing. With her mind made, she ventured out on her own personal discovery of expressing herself through art.

For the past 4 years she has attended Burning Man, and it became a catalyst for inspiration. Drawing from the realization that interactive art allows for a powerful experience, she’s created a show that is thoughtful and allows the viewer to also become a participant.

Working mainly in paintings featuring mixed media of acrylic, paper, writing, and stitching, this show took a different turn for the artist. As her 30th birthday draws near, she knew that she wanted to do something more personal, and turned to ceramics to share her story. Drawing striking parallels to the concept of the work, the new medium lends itself to learning and discovery as she takes us along on her exploration.

Incorporating snippets from her own personal journals (her earliest is from age 10), she embarks on a fascinating personal journey into emotion and the human experience. Using her own thoughts on events and circumstances from the past, her writing becomes a form of texture – and a direct, cut-to-the-heart example, allowing the viewer a jumping-off point into not only Sarah’s past, but their own.

Sarah finds it therapeutic to incorporate herself into her art. As in a good therapy session, it’s all about getting what’s on the inside out. In planning her pieces for the show, she realized that it’s as much about relating to others as it is about others relating to her. While the experience of poring through years of personal journals was mundane and embarrassing at times, she realized that others have felt the same things she had, and decided to turn the show into a community gathering, and a way for everyone to relate in this shared human experience.

The word “universal” is one that she uses emphatically when describing her vision. The realization that everyone goes through events that create strong emotion makes her want to share her own journey in the hopes that others can feel a connection to her, and ultimately, themselves.

She’s added music to the show, feeling that it provides another layer of shared experience, a house swing mash up as designed by the DJ (her boyfriend, Josh Kuester), creating an atmosphere that encourages both mingling and introspection.

This is a show to approach with a readiness to experience life and emotion. Her hope as an artist is that it inspires others to take a look at their own journey as she invites you into her personal world.

Before leaving, Sarah said to me, “We all have emotions and are so much alike”. This, to me, is one of the deepest truths, and the perfect summation of her work.